The Bai An communal house

The Bai An communal house is located in Nghia Do ward, Cau Giay district, hanoi vietnam. The communal house was built under the King Ly Nhan Tong and worships three town gods. They are General Uy Linh Phuc Than, General Chieu Dieu and Thuan Chinh princess.

The festival of Bai An communal house is annually held within 2 days from 9th to 10th of February (lunar calendar) to honor three town Gods who contributed their merits of building the dyke at intersection of Thien Phu river and To Lich river. 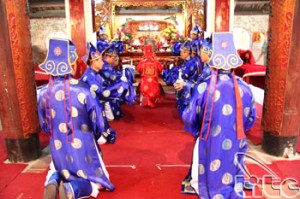 >>> The main Hanoi sights are centred around the ho chi minh mausoleum hours: Tuesday to Thursday & weekends from 8am to 11am

At present, the Bai An communal house is the oldest house remaining in Nghia Do ward. The house was built in early 17 century, common architecture style with inside round designed as “I” word model, outside round as “国” word  (Chinese text) model.

Remarkably, the communal house  still keeps  Lord Trinh’s  original order in paper in 1746 and in 1747 that allowed Bai An residents use the remaining part of Thien Phu river and neighboring fields for worship activities.

On the morning of 9th of February, a group of village elders wears festival traditional uniform, come into the communal house to report three Town Gods on activities in the village and prays for their blessing: healthy and virtuous next generations and prosperity. Then, the palanquin procession is conducted around the village by boys, girls and villagers. On the afternoon take place art performances and folk games.

On 10th of February, it is on  main festival and starts with worship of female sacrifice and male sacrifice carried out by village elders. Next is incense offering ceremony carried out by representatives from invited villages and villagers. On the afternoon, the festival takes place with folk singing and folk games such as: cockfighting, chess, etc.

The festival ends with thanks ceremony of village elders on sunset.

Read more: Top vietnam things to do, plus suggested routes.

Tags:things to do in hanoi, travel tips, vietnam travel

The Best lakes_ thing to see in Dak Nong